Where do bears turn when an important food source starts to vanish?

Golden and red-hued leaves and crisp evenings mark the coming of fall in the Greater Yellowstone Ecosystem (GYE) as grizzly bears search for an important food: whitebark pine seeds. The bears don’t collect these treats on their own. They rely on red squirrels to climb trees, collect the seeds, and store them in middens, or burrows. Grizzlies then sniff out the middens, excavate them using four-inch-claws (ideal for digging but not climbing trees), and devour the wealth of calorie-dense whitebark pine seeds inside. 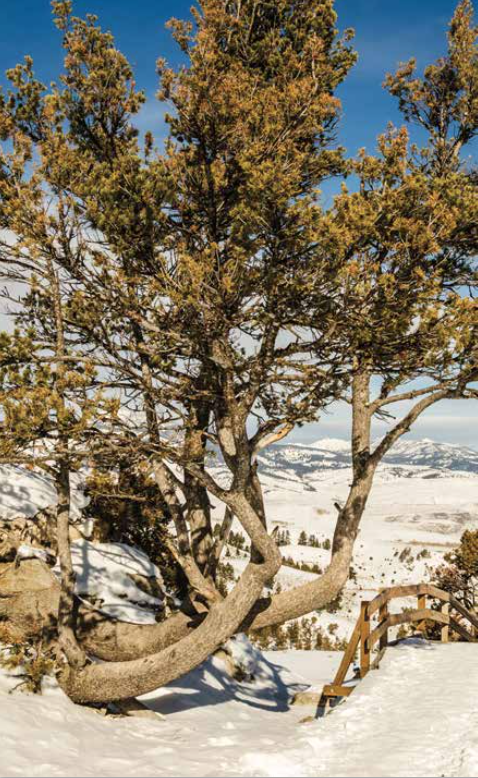 These whitebark pine seeds, an important part of grizzly bears’ fall diets in the GYE, are in decline. Scientists, such as Dr. Cecily Costello, an ecologist at the University of Montana, wonder how the decline of whitebark pine and the changing availability of seeds may impact the ways GYE grizzlies move around, with implications for managing human-bear conflicts.

The ecologists considered bear habitat at least 500 meters from roads or human developments “secure” with a lower risk of human conflicts. Whitebark pine, a high-elevation species, tends to grow in safer, more secure areas, luring bears away from potential clashes with people. When bears have to travel to find new food sources, they may enter areas with more roads and human habitation, increasing the risk for conflict.

Costello is lead author on a recent paper in Ecology and Evolution on the topic. Her study team trapped grizzly bears, affixed collars that store global positioning system (GPS) location data, and then tracked the bears’ movements in late August and September when they rely on the seeds as a key food source. Whitebark pine typically has a strong production cycle every two or three years. Bears eat according to availability, with up to 50-80 percent of scat volume consisting of the seeds during the years when whitebark pines produce an especially robust crop. 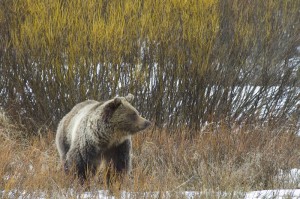 Since whitebark pine is such a large component of grizzlies’ food during years of high seed production, Costello and her colleagues wanted to find out how the changing climate, and decline of whitebark pine, may be affecting these bears. To do this, the team examined GPS location points collected from 72 individual grizzlies from 2000 to 2011, tracking what types of habitat the bears spent their time in and when and how far they moved to other areas, to test two alternate hypotheses. The first hypothesis, the one the researchers expected to be true, was that bears would move to new areas to find more whitebark pine seeds, putting them more at risk of conflict with humans. The alternate hypothesis was that the seeds perhaps weren’t that important to the bears and they would stay in the same area and find different foods instead.

Bears eat all types of things, making them what biologists call a “generalist” species. Previous research found GYE grizzlies eat 266 different kinds of food, including 175 plants and 83 animals and suggested that in years with low whitebark pine production rates, bears might shift to eating more animals, including elk, bison, and cutthroat trout. Also, regardless of whitebark pine production, some bears go to hunting areas each fall to take advantage of gut piles, wounding loss, and other animal remains left by hunters, thus increasing the risk of human conflict.

Males, which can be twice the size of a female, are particularly prone to carnivorous tendencies. “Male bears tend to be more dominant at a carcass of any kind, and they can pretty much beat anyone out: wolves, mountain lions, other bears,” Costello said. During one flight, the research team observed 13 bears within 250 meters of a single carcass. It’s easy to see why this may cause conflict in areas where hunters gather.

“Meat is really valuable to bears because it represents such a calorie-dense food,” Costello explained. “This is also true of whitebark pine seeds that are really high in fat and come in a perfect little package that is actually ideal for them to gain fat on.”

To understand to what extent those “perfect little packages” were enticing grizzly bears in the GYE, the ecologists measured how grizzly bear foraging behavior changed as bark beetles hammered whitebark pines during the 2000s. They’d expected the bears to move around more to target remaining pockets of whitebark pine seeds, as scientists have observed in some acorn-dependent populations of black bears. In falls with poor acorn crops, these black bears will travel farther to find more acorns.

However, Costello and her colleagues were surprised to find that the opposite was true. While the grizzlies could have traveled farther to find whitebark pine stands unaffected by beetles, they chose not to. “We saw no evidence that they moved larger distances as whitebark pine abundance declined,” Costello said. “I thought they would keep looking for [whitebarks] to more of a degree than they did.” Rather, the bears stayed put and switched foods when whitebark pine was unavailable. That’s good news, as the researchers found that even as whitebarks declined, bears stayed in secure habitats and did not come into more conflict with humans.

As grizzlies have a harder time finding whitebark pine seeds in the fall, it’s hard to say exactly what foods will fill the gap. While climate change may cause continuing declines in whitebark pine, bears are less at risk than specialist species that rely heavily on one particular food. “Generalists tend to respond to environmental changes more favorably than species that are specialists,” Costello said. “In the big picture, climate change has a high probability of having a negative effect on whitebark pine and much less so on grizzly bears.”