There are places in Wyoming where the sky is more imposing than the land. The force of wind and emptiness define this spare country. This is the home of sagebrush, prairie dogs, and coyotes. This is the home of golden eagles that soar on thermals, watching the ground for their next meal.

It is also the site of major wind energy development, with hundreds of turbines already turning and many more proposed. Wind power is an important solution for helping slow climate change and can provide new jobs, low-priced energy, and plenty of economic benefits for windy Wyoming. With new transmission lines planned, Wyoming’s wind power generation and connectivity is set to increase dramatically.

This has Mike Lockhart worried. Landscapes filled with wind turbines, each blade moving about 150 miles per hour at its tip, are deadly for bats, smaller birds, and raptors including eagles. Power lines threaten electrocution, and development means habitat loss, especially for golden eagles, which are particularly sensitive to human intrusion.

Lockhart, a wildlife biologist who started studying golden eagles in 1972, believes that “climate change is the most pressing environmental challenge in human history.” He supports clean energy development. But, he says, the transition away from fossil fuels can’t come at the expense of sensitive and valuable wildlife while there are alternatives available. He has spent the last decade collecting the data needed to keep that from happening, trying to protect eagles from being overlooked in the rush to increase wind energy generation. 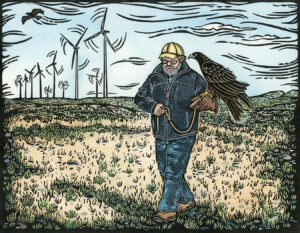 In the Shirley Basin near a proposed wind farm, Lockhart drives a remote dirt road. He is looking for the perfect spot to set a trap for a wild eagle so he can examine it and fit it with a tracking device like a tiny backpack. Lockhart works with the US Geological Survey and Conservation Science Global Inc. with funding from the National Fish and Wildlife Foundation. In the last eight years he has captured 185 golden eagles and fit 122 with tracking devices on breakaway harnesses. Of those, eighty-nine were captured on or near wind project areas and proposed sites. The huge amount of data collected should help identify which wind projects will put eagles at risk.

When he finds the right place, Lockhart moves quickly. Eagles are so observant and wary that if they see him setting up his trap they will stay away. From the back of the pickup, he brings out his working partner of five years, a golden eagle with sharp curved claws, intelligent eyes, and one wing that was broken in the past and never healed properly. Although they have a comfortable relationship, and Lockhart cares for her like a family member, this eagle doesn’t have a name. She is a wild bird, not a pet.

This golden is a lure eagle, meaning her presence on the ground next to a dead prey animal will tempt other eagles to investigate. Although she can’t fly, Lockhart thinks she enjoys being out on the plains on trapping days, socializing with other birds. He tethers her near a game camera, a frozen jackrabbit, and a specially modified leg trap that only a golden eagle’s weight can trigger. Then he drives far away to watch through binoculars.

This part of Wyoming is expansive and uninhabited except for a distant ranch tucked against the foothills of the Shirley Mountains. There are no trees to block the view as Lockhart keeps one eye on the trap and one eye on the sky.

“Shirley and Laramie Basins—and adjoining hills and mountain slopes—are one of the most important habitat areas for golden eagles in North America,” he says. They support large, year-round eagle populations and are a major migration corridor and overwintering area for migratory eagles. 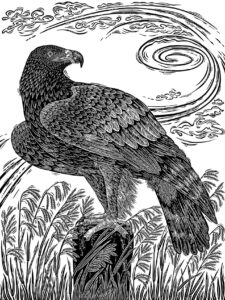 He has seen this spending hours poring over the GPS data from eagles he is tracking. The eagles are individuals to him; he knows the habits of each one. The longest migrator winters in Raton, New Mexico, and summers in Denali National Park in Alaska. Another eagle, tagged in 2016, successfully reared young for four years. Then, months after a wind project became operational, a turbine killed the eagle while it still had an eaglet in the nest. Wind turbines have also killed three other eagles Mike was tracking. The US Fish and Wildlife Service requires companies to check for eagle nests within a two-mile radius of newly proposed wind sites, but Lockhart says there are known nests well within that radius of wind turbines now.

It is federally illegal to kill or harm eagles, but difficult, if not impossible, for wind projects to avoid. Worst case, these eagle deaths go unreported unless discovered and prosecuted. Best case, companies operating turbines can seek incidental take permits, which allow a certain number of eagle deaths to happen without a fine. For the permit, the companies must have plans to minimize eagle collisions and enhance their conservation in other ways, like employing spotters who can have a string of turbines temporarily stopped if they see an eagle in the area. There is also new technology, the IdentiFlight system, which combines cameras with artificial intelligence to identify birds and their flight path and shuts down turbines where needed. Power companies can also retrofit power poles to prevent eagle electrocutions.

According to Lockhart, both spotters and the camera system are “far from fool-proof,” and “must not be used as a crutch to justify new projects in prime habitat.” That means stopping new developments in these important areas of the Shirley and Laramie Basins.

His data show that “most of Albany and Carbon counties [the location of Shirley and Laramie Basins] are exceptionally important habitat for golden eagles.” Also, they already have wind energy projects that cause significant eagle deaths. “Increased wind development,” he says, “will exponentially, profoundly impact both resident and migratory populations.” Lockhart believes there are alternative locations available, that aren’t in dense eagle habitat but still have enough wind to generate clean energy. Now is the time to include this valuable wildlife in the equation along with the other benefits, so that green energy isn’t devaluing a segment of the natural world while simultaneously trying to benefit the natural world.

Standing in the sparse, wind beaten landscape in the afternoon, Lockhart decides it’s time to pack up, even though he’s disappointed he hasn’t caught an eagle all day. Nothing is guaranteed out here—for the biologist looking for an eagle, or the eagles looking for a meal. Later, he’ll study the camera images to see which birds visited the site and the drama that unfolded around the jackrabbit bait while he was driving around other parts of the valley. For now, he kneels to let his lure eagle step onto the gauntlet protecting his arm. She flaps her huge wings and settles. As Lockhart stands, he strokes her feathers, a gesture of appreciation before the drive back home.

Jill Bergman, an artist and printmaker living in Steamboat Springs, Colorado, is originally from windy Wyoming. For years, she has worked to incorporate her interest in environmental issues and public engagement into her art practice. Learn more and see her artwork at www.jillbergman.com.