This story is a sidebar to One Irrigator’s Waste is Another’s Supply: Upstream Efficiencies Mean Less Water for Downstream Users in Nebraska’s Panhandle.

As a child in northeastern Wyoming, I remember my summers as irrigation season. May meant the ceremonial ditch cleaning and the Sisyphean task of replacing broken gates along the lines of PVC pipe that delivered water to the fields. I spent June mornings setting orange tarps only to find that by evening the corners so carefully tucked in to the dirt had come loose. The irrigation ritual was predictable and comforting. Yet for all that is known about irrigation in Wyoming, critical pieces of the picture remain unexplored. 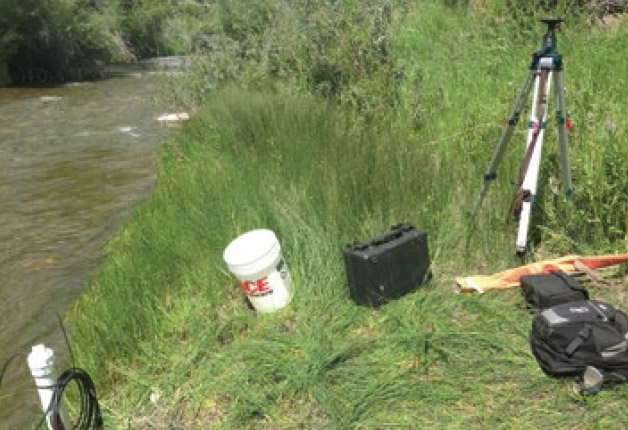 Survey equipment and stilling well at site along Bear Creek.

Although agriculture currently accounts for 90 percent of total water withdrawn from streams and aquifers in our state, the proportion of water actually consumed by crops remains uncertain. Water managers have an increasing interest in quantifying “return flow” or the portion of irrigation water that seeps through the ground and returns to local streams and aquifers. Now, as a graduate student at the University of Wyoming, I’m part of a team exploring new, more accurate ways to track and measure those return flows.

Flood irrigation delivers water to a field or a section of a field via pipes or ditches, saturating the upper portion of the soil profile. In Wyoming, the State Engineer’s Office generally assumes that about half of flood irrigation water returns to a given stream. In reality, the amount and timing of return flow varies significantly depending on the soils, geology, and hydrology of a particular system. As irrigators switch from flood to more conservative irrigation methods like sprinklers, managers need to understand the role return flows play in recharging local streams and aquifers.

That’s why I spent the summer of 2014 installing hydrologic and geophysical instruments in irrigated fields and along a stream in western Wyoming. Together with University of Wyoming professors Scott Miller and Ginger Paige, I am part of a research team studying water movement on a section of irrigated meadow managed by the Wyoming Game and Fish Department. Bear Creek, the targeted stream, lies between the Wiggins Fork and East Fork of the Wind River on the Spence Moriarty Wildlife Habitat Management Area, an elk feeding ground southeast of Dubois. Over the course of several years, our goal is to use geophysics in concert with more traditional hydrological methods to get a handle on the timing and amount of return flow contributions to Bear Creek. Only one other published return flow study has ever been completed in Wyoming, back in 1989. We aim to broaden understanding of the role return flows play in a range of systems and to give managers across the state more tools to oversee water resources.

We are using a “water budget” approach to account for the various ways water enters and leaves the system. This approach will help us track the amount of water that returns to Bear Creek following irrigation. We are using several different hydrological, geophysical, and climatological instruments to establish the water budget. The short irrigation season from May until early August gives us a narrow timeframe to place our instruments and collect data. Much of this first year, we focused on installing instruments and developing and testing new field methods.

First, we installed seven submerged pressure transducers (SPTs) in Bear Creek and the nearby Fosher Ditch. SPTs are small cylindrical sensors that we submerge in stilling wells, PVC pipes set in the bank to dampen immediate fluctuations in water level while capturing water level rises and falls in the main channel. The SPTs record the stream’s water level every 15 minutes. We also manually measured flow at several permanent monitoring locations along Bear Creek. These measurements allowed us to determine the volume of water flowing through each monitoring section in Bear Creek at that specific moment. We put together the data from both the transducers and the flow measurements to create a rating curve, an equation that approximates streamflow volume over the course of the season.

We also collected weather data from a small, extraterrestrial-looking meteorological station, which was of particular interest to the local elk and moose who ultimately pushed it over with the help of November snows. The “met” station recorded temperature, wind speed and direction, net solar radiation, net long wave radiation, and albedo throughout the summer. We use these measurements to calculate potential evapotranspiration. That lets us approximate how much water the vegetation in the irrigated meadow consumes over the course of a day.

In the traditional water budget approach, the water that enters the system as precipitation should equal the water that leaves the system as streamflow, subsurface storage, return flows, and evapotranspiration by vegetation. By analyzing our calculated values for streamflow and evapotranspiration along with precipitation data, we are able to determine how much water is neither consumed nor converted to surface runoff. That is the water that we expect is either stored underground or returned to Bear Creek. This first year of hydrological data were further enhanced by preliminary geophysical experiments exploring subsurface hydrologic characteristics. Electrical Resistance Tomography uses a series of electrodes stuck into the ground across the field to monitor how soil conductivity, an indication of soil water, changes over time. Nuclear Magnetic Resonance measures magnetic fields to detect water molecules underground, which shows us how much water is in the soil and how deep it is. Coupling these two approaches, we hope to discover the timing and amount of return flows making it back to Bear Creek.

Our study is in its early stages. With additional summers of field work and data collection ahead of us, we have yet to determine how or if return flows work in this system. We do hope that isolating components of the water budget and tracking subsurface water movement with geophysical methods will allow us to quantify and describe return flow processes in Bear Creek. If we can refine return flow estimates in this system, it may help us improve understanding of return flow’s larger role in the state.

Beatrice Gordon is a Wyoming native and a first-year master of science student in water resources at the University of Wyoming.