Walk through the sagebrush or a forest in the west this summer and you are likely to hear the raucous clicking or buzzing of cicadas.

Cicadidae, a family of shiny, large-eyed insects in the suborder Hemiptera, are probably the noisiest bugs around. Their shrill song is in fact a mating call males produce to attract the quieter females. Most adult cicadas live for only two to six weeks, sucking sap from trees and shrubs using their piercing beak mouthparts. Females lay eggs in twigs and thus sometimes damage terminal branches of trees. After hatching, the nymphs drop down to the soil and burrow into it using their enlarged front legs. The nymphs live for many years underground where they feed on the fluids in plant roots.

In the eastern United States, the so-called periodical cicadas (Magicicada species) produce spectacular synchronized broods emerging en masse every 17 or 13 years. This year a big brood of 17-year cicadas was expected, but the actual emergence was smaller than entomologists had predicted. Sometimes these cicadas are incorrectly called “periodic locusts” while in fact the real locusts are a different type of insects, the swarming grasshoppers. Nymphs spend all those years in the soil and then emerge, molt into adults, and live for a few weeks as adults to reproduce. As such, the periodic cicadas have one of the longest life cycles among all insects; in Wyoming, they would even qualify for driver’s licenses! However, these periodical cicadas do not occur in the Rocky Mountain region.

Wyoming is home to over 20 different cicada species. They do not live as long as the famous eastern species, usually between 2 and 5 years. These cicadas are found in sagebrush, grassland, and shrub areas. They are so well camouflaged that usually you hear them but can’t spot them. Some of our species are quite big. For example, the giant grassland cicada and dog-day cicada, both Tibicen species, are close to two inches long with wingspans of over four inches. Adult cicadas are great fliers.

This year two pretty, at least to entomologists, orange and black colored species of cicadas emerged in noticeable numbers in the mountain foothills of northern Colorado and southeast Wyoming. If you didn’t see them you probably heard them. The narrow, one-inch-long Platypedia putnami males make clicking calls, it is thought, by flexing their semi-rigid wing surfaces and then letting them return to their relaxed shape, similar to pres 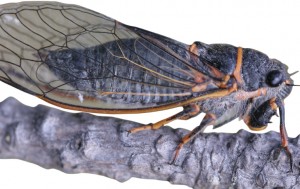 sing and releasing the sides of a pop can to make clicking noise. The more stout, 1.5-inch-long Okanagana bella males produce the typical shrill buzzing song.  O. bella and most other species of cicadas have paired membranes, called tymbals, on the abdomens that they vibrate with muscles and resonation chambers inside their bodies to produce their mating calls.

The adults of these two particular species do not feed but are good food for other animals. After their long lives as grubs underground, cicadas emerge to provide a rich source of calories for birds and small mammals, and the defining music of a Wyoming summer.

Alex Latchininsky and Scott Schell are Extension Entomologists at the University of Wyoming.