A diverse team knuckles down on a daunting natural resource issue

Problems with ground-level ozone have bedeviled Sublette County in recent winters, creating a periodic public health hazard, management issues for the region’s oil and gas operators, and a regulatory challenge for Wyoming’s Department of Environmental Quality.

And when the federal Environmental Protection Agency declared Sublette County a “nonattainment” area in 2011, the need to solve the ozone problem became even more urgent.

Ground-level ozone is the main component of smog and is created by chemical reactions between oxides of nitrogen (NOx) and volatile organic compounds (VOC). Unhealthy ozone levels normally are associated with hot, sunny days in urban environments, but the phenomenon has occurred in Sublette County—the home of intensive oil and gas development—on sunny days when snow is on the ground and temperatures are near or below freezing. High ozone levels can cause or exacerbate health problems, especially with breathing.

Then-DEQ Director John Corra, recognizing that finding a Sublette County ozone solution would be difficult in part because the situation involved concerns about the region’s public and economic health, decided the best approach would be to bring all parties to the table. Also recognizing that getting such a group to work together could be a challenge in and of itself, he turned to the University of Wyoming’s Ruckelshaus Institute of Environment and Natural Resources for help.

“Without a good process, convening a group of 26 people would not have succeeded. It’s too big of a group and too diverse. We purposely chose people who were strong in their beliefs and ideals, articulate and actively involved in the area,” Corra said. “It really did require good facilitation. Both Steve and Elizabeth did a great job.”

The task force—which includes local residents; local government leaders; and representatives of the oil and gas industry, DEQ, the Bureau of Land Management, the U.S. Forest Service, public health groups and the governor’s office—presented its recommendations to DEQ in September 2012.

The task force brainstormed more than 60 possible ways to reduce ozone formation, but members determined that the final list of recommendations would include only measures upon which everyone agreed. The process of reaching that consensus was tedious and time consuming, all participants agreed. But it was successful.

In the end, the group produced 10 recommendations. They include improving management of ozone “action days”; existing stationary emission sources; non-road mobile exploration and production emission sources; leak detection and repair; produced water and storage; monitoring and reporting; and stronger DEQ involvement in monitoring. In general, Smutko said, the recommendations call for use of best available technology to reduce emissions both from existing industrial operations and newly permitted operations in the area.

“We know this will reduce ozone,” he said. “We don’t know by how much.”

Wyoming Gov. Matt Mead praised the task force’s collaborative effort, and Corra said the recommendations were “all very good,” as his agency began an analysis to determine if they can be implemented. Corra retired last year, and Todd Parfitt became the new director of Wyoming’s DEQ.

In March, DEQ’s Air Quality Division released its Upper Green River Basin ozone strategy, with short- and long-term activities designed to tackle the nonattainment issue. The strategy addresses several of the recommendations made by the task force, such as strengthening monitoring and reporting requirements and designating a point person 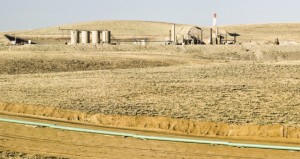 at DEQ to respond to public comments and concerns as the ozone strategy moves forward. In addition, DEQ soon will begin new rulemaking on issues identified by the task force.

Having worked with Smutko in a similar process to develop a new strategy for coal-bed methane wastewater discharge permits in the Powder River Basin, Corra knew the UW faculty member had the expertise to help the task force navigate a contentious, high-stakes process. While Smutko was involved from the start, Spaulding served as the primary facilitator, a job that included initial one-on-one discussions with the task force members, and leading a meeting to establish objectives and ground rules for the group.

Some task force members wanted to consider factors beyond industrial activity that might contribute to the ozone problem, but the group decided to focus on the issue as an industry impact, Smutko said.

“We had to make sure that everybody, early on, understood the issues to be resolved,” he said.

Smutko’s and Spaulding’s backgrounds in natural resource issues, combined with their facilitator skills, constitute a tremendous resource for the state, Corra said. Both Corra and Parfitt are members of the board of UW’s Haub School of Environment and Natural Resources, of which the Ruckelshaus Institute is a division.

“Seeking input from a diverse group to help us solve problems requires the services of a facilitator,” Corra said. “My sense is that the value of that service by the university is going to grow.”

Smutko, who was hired two years ago from North Carolina State University largely because of his background in collaborative process, said bringing parties together to solve problems is part of the Ruckelshaus Institute’s mission: to “communicate relevant research and promote collaborative decision making to support stakeholder-driven solutions to natural resource challenges.”

“We want to see the university fill a role as not only a provider of information for decision-makers, but also to provide a neutral forum to enhance the capacity of the people of Wyoming to solve these sorts of problems,” Smutko said.

Chad Baldwin is Director of Institutional Communications for the University of Wyoming.