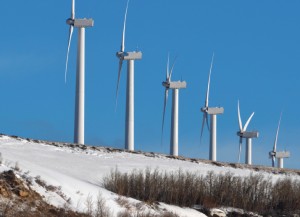 In 2012 the Bureau of Land Management signed the Record of Decision for the Chokecherry and Sierra Madre Wind Energy Projects, which combined would be the nation’s largest wind facility. The proposed facilities would consist of 1,000 wind turbines that would represent 2,000–3,000 megawatts of total generating capacity, or up to fifteen times that of Wyoming’s largest existing wind facility and two to three times larger than the largest existing project in the United States.

The project developer, Power Company of Wyoming, LCC, a subsidiary of Anschutz Corporation, estimates Chokecherry/Sierra Madre would provide enough electricity to power one million homes. The project will cost $4-6 billion to construct, and the company estimates project construction and operation will create over 1,000 temporary jobs and up to 114 permanent positions. In addition to payments to the federal government for land use, and state income from property tax and sales tax, the project would pay up to $7.5 million per year to the state of Wyoming under its wind energy production tax instated in 2010.

Located south of Rawlins, the project area encompasses 219,707 acres of public, private, and state lands, or roughly the area of the Jonah and Pinedale natural gas fields put together. The Power Company of Wyoming states, however, that turbines and associated infrastructure will directly impact less than 2,000 acres. Part of this acreage includes mule deer crucial winter range and elk and pronghorn range. The projects are estimated to kill 5,400 birds each year, a figure that includes 150–210 annual raptor fatalities.

Federal forces are pushing the project forward with the full support of the Obama Administration. In August 2012, the administration announced the federal government would expedite seven renewable energy projects, including Chokecherry/Sierra Madre. The BLM also lists the project as a “2012 Priority Renewable Energy Project.”

Anne Jakle served as acting interim Assistant Director of the Ruckelshaus Institute at the University of Wyoming and is now Senior Policy Analyst at the New Mexico Energy, Minerals, and Natural Resources Department.