Bees are declining, and that’s bad news for ag producers. In the United States alone, the number of honeybee colonies fell nearly 60 percent from 5.9 million in 1947 to 2.4 million in 2008. These declines are cause for concern: bees and other pollinators are a key component of biodiversity, and the pollination services they provide are essential for growing the food we eat. Indeed, all flowering plants rely on pollination to reproduce. And because these plants have co-adapted with bees and other pollinators over several millennia, without them, experts warn of parallel declines in plant species.

The exact cause of pollinator die-offs is difficult to pin down. Researchers agree that a complex interaction of disease, parasites, invasive species, and climate change is partly to blame. And changes in land use—particularly aggressive agricultural practices that plant crops on every available acre—eliminate large swaths of wildflowers and other plants that sustain pollinators. Even if some patches of wildflowers remain, they may be too small or too far apart to support pollinators. Now a University of Wyoming agricultural economist has shown that tweaks to an existing government program could encourage farmers to better protect large stretches of pollinator habitat.

The US Department of Agriculture pays landowners to plant pollinator-friendly crops. Since 2012, the agency has enrolled over 124,000 acres in the Conservation Reserve Program’s Pollinator Habitat Initiative known as CP-42. Under the voluntary program, landowners receive a one-time conservation payment to plant wildflowers and other pollinator-friendly plant species on plots where they would have otherwise planted traditional, more profitable crops that are less enticing to pollinators.

“But the problem with this program is that a landowner who plants several isolated parcels is incentivized the same as a landowner who plants several continuous parcels,” says Chian Jones-Ritten, Assistant Professor of Agricultural and Applied Economics at the University of Wyoming. Larger contiguous tracts of pollinator habitat are better for bees than smaller tracts spread across a landscape.

To address this concern, Jones-Ritten and her colleagues recently ran an experiment to test the idea that the Department of Agriculture could create bigger, more continuous tracts of pollinator habitat by offering landowners a different kind of economic bonus. 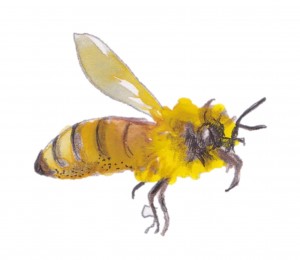 Nearly 150 participants played a computer game, which rewarded them at different levels for conserving and connecting private land parcels for pollinator habitat. The computer-based experiment included four treatments. The first mimicked the current CP-42 conservation program and paid participants for each parcel of land they set aside. In the second treatment, participants again received a basic conservation payment for each parcel they conserved, but also earned a “spillover” bonus, equal to 5 percent of the land’s production value, for the agricultural parcels immediately adjacent to the conserved parcels. Traditional crops adjacent to pollinator habitat typically have higher crop yield—the spillover benefit to the landowner.

In the third treatment, participants received the basic conservation payment for each conserved land parcel, as well as an “agglomeration” bonus, worth 10 percent of the average production value of the land, for each conserved parcel that shared a common border with another conserved parcel. Agglomeration bonuses, paid as cash by the Conservation Reserve Program, reward landowners for creating and maintaining continuous tracts of pollinator habitat across private landholdings.

In the final treatment, participants received the basic conservation payment for parcels they set aside, as well as both the spillover and agglomeration bonuses for adjacent parcels.

Perhaps not surprisingly, the participants created more well-connected “habitat” when incentivized to do so. “Their behavior was cooperative when they realized that acting cooperatively would increase their benefits,” and less so when they figured their private benefits would not increase significantly, Jones-Ritten says.

What was most surprising was how well the agglomeration bonuses worked to create continuous and well-connected tracts of pollinator habitat. Where the basic conservation payment and spillover bonus treatments achieved roughly the same number of conserved and connected pollinator habitat parcels, the two treatments that included the agglomeration bonus scheme produced nearly double the number of conserved and connected parcels.

Jones-Ritten cautions that agencies will have to determine if the money paid out through these bonuses is proportionate to the level of conservation. Still, her work does support the notion that agencies and other conservation organizations wanting to change the way landowners manage their land can incentivize the behavior they want to see.

Kit Freedman is the Project and Outreach Coordinator for the Ruckelshaus Institute of Environment and Natural Resources at the University of Wyoming. This research was supported in part by a gift from the Walton Family Foundation through the Wyoming Open Spaces Initiative.

The True Value of Flood Irrigation