Over the last 15 years, drilling has intensified in formerly remote wildlife habitats across the West. To understand its impacts, scientists have netted ungulates from helicopters to fit them with radio collars, tracked and counted birds, captured thousands of reptiles, and compiled reams of geographic data on vegetation, landforms, and expanding networks of well pads and roads. The following is a brief survey of surprising findings culled from the last five years of research examining energy development’s effects to critters large and small.

Pronghorn shy from drilling
Though thought to be more tolerant of energy infrastructure than deer or elk, pronghorn abandoned densely developed parts of the Pinedale Anticline and neighboring Jonah natural gas fields as development progressed in western Wyoming.[2] 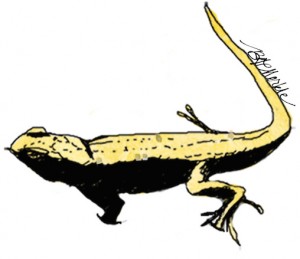 Lizard blowouts get blown out
Habitat specialists like the dunes sagebrush lizard, of the Southwest’s Permian Basin, are particularly vulnerable. They rely on sandy depressions called dune blowouts, and researchers found they were much scarcer at sites where fragmentation by roads and well pads reduced this key feature. The decline of other lizard species at fragmented sites also changed overall lizard community composition.[4]

Fishery impacts unclear
To determine how factors like altered stream flows from groundwater pumping or sedimentation from road and well pad construction would affect fish, researchers zapped, identified, and counted them at 285 stream sites in Wyoming’s Colorado River drainage. They found some species, like non-native carp, were more abundant in areas with high well densities while others, including native bluehead sucker, were more abundant at sites without wells.[5]

Sage grouse stressed by sound
The low frequency vocalizations that sage grouse use to attract mates may be blotted out by gas-patch noise. Researchers in Wyoming who subjected sage grouse at remote leks to recordings of drilling and road noise found that males attended in lower numbers relative to quiet leks, and had more stress hormones in their droppings. [6], [7]

Predators on the prowl
Researchers pointed video cameras at 657 nests of three songbird species in a western Wyoming gas field to catch predators in the act of stealing eggs or hatchlings. It turned out that 75 percent of the perpetrators were rodents. In areas with more energy development, predation by certain species of mice and ground squirrels increased—and nest survival for Brewers sparrows and sagebrush sparrows decreased.[8]

It’s the wheatgrass
Researchers in Alberta examined five grassland songbird species’ success relative to distance to oil and gas wells and roads and cover of crested wheatgrass, an invasive plant in Canada that thrives in disturbed areas. Of the energy development influences they compared, the exotic grass had the biggest effects. Sprague’s pipit nest survival decreased and savannah sparrow density declined with more crested wheatgrass cover.[9]

Illustration by Bethann G. Merkle, © 2015. Any reproduction of this illustration requires permission from the artist.

See the full illustration as it appeared in the print issue.