Dr. Jeffrey Beck and his colleagues and students have quantified canopy cover, measured native and invasive plants, counted insects including ants, beetles, and grasshoppers, and more, all in an effort to understand how burning or mowing sagebrush might bolster or degrade sage grouse habitat. Now, in a new study in central Wyoming, they’ll monitor not only habitat characteristics, but also sage grouse themselves, to find out whether the birds successfully rear more chicks where managers mow or chemically thin sagebrush. 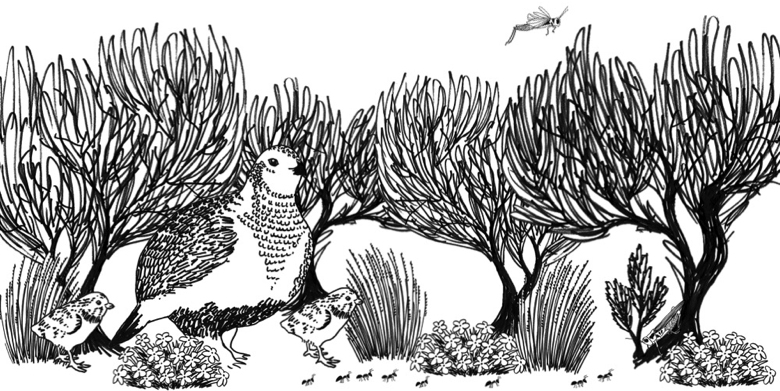 Untreated Wyoming big sagebrush is characterized by tall shrubs with a thick canopy. The understory includes bare ground near the sagebrush trunks, plus some native grasses, forbs (native wildflowers and other leafy plants), and sagebrush seedlings between the shrubs. Insects, such as ants and beetles, provide choice food for newly hatched chicks. As chicks grow larger, grasshoppers become more important in their diets. An average of two chicks per hen recruited into the fall population is considered excellent reproductive success for Wyoming sage grouse populations.

Wyoming big sagebrush that has undergone prescribed burning is characterized by blackened trunks and reduced canopy cover. Establishment of new sagebrush plants is slow after burning. The understory includes similar amounts of forbs to untreated sagebrush, with increased native grasses as well as invasive grasses. Beck’s earlier work found increased grasshoppers in burned patches. Research suggests burned habitat does not support as many of the birds as untreated habitat due to sagebrush loss. Prescribed burning is not part of Beck’s new study.

Mowed Wyoming big sagebrush is characterized by shorter shrubs with new growth at their tops as well as more new sagebrush seedlings growing underneath. The understory includes the same amount of native grasses, forbs, and insects as untreated sagebrush, as well as some invasive grasses that thrive on disturbance. In his new study, which will continue for several years, Beck and colleagues hope to determine whether mowing sagebrush will improve or decrease sage grouse reproductive success.

Treating Wyoming big sagebrush with the herbicide Spike 20P can kill about half of the sagebrush plants, leaving standing skeletons. Beck’s new multi-year study of this treatment, expects to find increased sagebrush seedling growth, native grass, and native forbs compared to untreated plots. Some invasive grasses may be present as well. Beck and colleagues will try to determine whether such treatment will improve or decrease sage grouse reproductive success.

Text and illustrations by Emilene Ostlind

This article is a sidebar to the story Constructing Sage Grouse Habitat.

Note from the Associate Editor (summer 2015)