Alarms wake the researchers, students, and technicians living in “Chicken Camp” at 3:45 a.m. this chilly April morning. Now, caffeinated and bristling with gear they head out into the rolling sage-tufted hills near Lander, Wyoming. They drive trucks down a rutted two-track and walk stealthily the last few hundred yards to a small clearing in the sage. The crew quietly sets up blinds, microphones, Go-Pro cameras, an amplifier, an mp3 player, and other gear. They settle in, switch off headlamps, and listen, prepared to wait more than an hour. 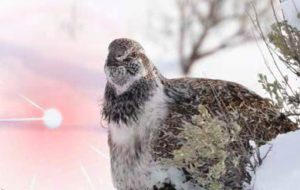 “It sounds like a bomber coming in—you’ll hear whistling through the feathers,” says Gail Patricelli, leader of the crew and a professor at the University of California, Davis. “Almost like a helicopter landing,” says Ryane Logsdon, a PhD candidate in Patricelli’s lab.

Soon, the listeners hear other sounds: Two swishes like rubbing corduroys precede an other-worldly “coo,” followed quickly by a “pop” like a rubber ball bouncing, a whistle, and another “pop.” The bizarre sequence echoes around the sage.

These are the sounds of a sage grouse lek, a place where males gather and display competitively for mates. And this is the most intensively monitored lek in the sagebrush sea. Patricelli and her colleagues have been studying the birds’ behavior on this lek for more than a decade. Here, researchers record strutting males and lurking females through sound, video, and photographs; scan the lek with lasers; capture the olfactory fingerprints of crushed leaves; and fly small airplanes low over the sage, mapping the terrain. Researchers like Logsdon and Patricelli are deploying cutting-edge technology to examine the sage grouses’ habitat from the landscape scale down to the individual bushes they prefer. The grouse face an uncertain future. Plummeting population numbers have spurred scientists to collect detailed data about the birds and their habitat needs. What they find could save the birds from extinction.

An estimated 16 million sage grouse once foraged and strutted across about a quarter of a million square miles of sagebrush steppe. During the past century, habitat loss sent sage grouse numbers tumbling to as few as 200,000 birds and contracted their range to about half its historic reach.

The decline put the grouse under consideration for listing with the Endangered Species Act. This in turn ignited concern among the people and industries that use the sagebrush landscape about the effects regulations would have on their livelihoods. During years of sometimes-heated negotiation, an unprecedented collection of conservation plans arose between state and federal agencies, private landowners, and nonprofit organizations across 11 Western states. In 2015, the US Fish and Wildlife Service declared a listing was not warranted, due to the strength of the collaborative plans for the bird’s protection.

The threat of a listing brought the bird’s fate to the nation’s attention and triggered new research to inform the decision and monitor the success of the conservation plans. Rapid advances in remote sensing, robotics, and biochemical methods are flooding into conservation research. Sage grouse are seeing many of these advances. The sprawling, remote nature of their habitat demands a technological approach and scientists are deploying a variety of devices and approaches across the West.

Patricelli has spent years refining her two female sage grouse robots, nicknamed Salt and Pepa. Each is crafted from taxidermied sage grouse skin, fit over a body of model airplane parts, circuitry, and a remote-control vehicle base, complete with nubby tires that can motor over rocks and around plants on the lek. The “fembots” turn their heads and bend down to browse plants convincingly enough to deceive most real males.

Only one of the fembots is on duty at a time. Logsdon, in the main blind, radios Patricelli in a smaller blind on the lek itself with driving directions to help guide the bot through a preset route. “I have her stop at each of those spots for about a minute and look around as if she is scanning the lek,” Logsdon says. “That gets the guys really amped up and trying to impress…sometimes the male will rush up and we have to take evasive maneuvers.” When not backing the bot away from the enthusiastic advances, she takes notes about how the news that an interested female is present reaches other males around the lek.

This is her third season spent near Lander, trying to learn how sage grouse use their microhabitat —individual clusters of sagebrush. Where the males move and how they place themselves in the lek affects what they can see and whether females can see them. Some leks are open, grassy spaces while others are closed and filled with wild-looking sage clusters. Males may have different strategies for these different lek types. The robots are helping researchers understand the birds’ preferences and the factors that allow them to survive. “Despite the presence of sagebrush all over, it is not necessarily good sage grouse habitat,” Patricelli says.

A close look reveals details in the vast sagebrush landscape important to the grouse. Earlier last year, collaborators from Boise State University in Idaho scanned the three-dimensional structure of the lek, capturing every last sage leaf, using a technology called Terrestrial Laser Scanning. The system looks like a small Star Wars droid mounted on a tripod. It sends out laser pulses that bounce back when they hit a sage stem, leaf, or hillside.

The team, headed by Jennifer Forbey, an associate professor of biological sciences, will construct a digital version of the lek with the TLS data. They could, for example, note the location of a nest and explore its surroundings. “You get 360 degrees any distance away, any height, you can assess how vulnerable that nest would be from a predator like a raven perched on a nearby juniper tree,” Forbey says.

The researchers also explore the habitat through the sage grouse’s senses.  Forbey is coordinating work to test the use of an electronic nose, a handheld sensor that “sniffs” the air to detect specific particles. The researchers wrap sagebrush in plastic bags to capture chemicals it emits and examine the olfactory “fingerprint” of different sage species. They hope this information can help them learn what types of sage the grouse prefer to eat. Patricelli measures the soundscape of leks. Since the sage grouse strut involves unique vocalizations, she wondered if noise could drive males from the lek. Her team recorded sound from nearby towns, roads, and well pads and then played the recordings back to grouse on the lek through a hidden mp3 player. Stress hormones spiked in the fecal pellets of noise-disturbed males and lek attendance dropped.

“All this technology gives us a way to smell and see from the perspective of the actual animal,” Forbey says. “You can detect things in ways that our own sensory systems cannot.”

Focused surveillance on a single species may seem unusual, but the technology is offering a more nuanced understanding of sage grouse and their conservation needs. Some of the findings are already informing conservation efforts: The realization that human sounds can drive sage grouse from leks helped wildlife managers put a limit on noise near critical areas in Wyoming. However, exactly how the research and conservation efforts will translate to sage grouse recovery remains to be seen.

Tom Christensen is the Sage-Grouse Program Coordinator for the Wyoming Game and Fish Department. Most states base their management decisions on population monitoring, done through some combination of spring lek counts, summer brood surveys, and collecting wings from hunters during the fall. The state also flies airplane surveys using infrared cameras to offer clues on where the birds winter.

To extract trends from those counts, experts like Christensen look long-term, going back as far as 1965, when Wyoming monitored only 28 leks. (Today the state watches nearly 1,700.) Sage grouse populations explode and decline regularly, much like rabbit numbers do. In 1968 Wyoming’s leks averaged 58.8 males. Three years later, that number dropped to 25.5, and by 1978 it climbed back up to 40.1 males per lek. Sage grouse reached their nadir of 13.1 males per lek in 1996. The trends in Wyoming have never been as grim as those range-wide because much of the sagebrush is relatively intact in the union’s least-populous state. But the decline is there.

“Generally over the last century, the peaks of those population cycles have dropped lower and also the valleys,” Christensen says. “The long-term trend is why you see the concern.”

The males-per-lek measure climbed in 2014, 2015, and 2016, as compared to previous years, leading some reports to tout a “rebound” in sage grouse numbers. However, Christensen points out that the natural cycle should put the birds in an upswing right now. It would be far more concerning if the grouse weren’t doing well these past few years.

The USFWS aims to review the state-led sage grouse conservation plans in 2020. But by that time the conservation efforts and regulations may have long been overturned: In fall 2017, the Department of the Interior announced an intent to replace the existing sage grouse plans with new ones.

Even if the current sage grouse conservation plans were to stay in place, Pat Deibert, a wildlife biologist and the USFWS Sagebrush Ecosystem Science Coordinator, doesn’t expect the 2020 review, five years after the listing decision, to determine if sage grouse have recovered. (Instead of tracking numbers, the review will focus on whether commitments to conservation goals are being kept.)

“We are not entirely out of the woods yet, or out of the sage, but the conservation commitments and the recent trends in population numbers give us a lot of hope that we are turning a corner,” Deibert says. It may take 20 or 30 years to know if sage grouse are recovering or going extinct.

The current conservation plans rely on the detailed view of sage grouse biology and landscape use offered by researchers like Logsdon, Patricelli, Forbey, and many others to inform better management decisions. As new technology allows scientists to ask and answer questions that were impossible to address a few years ago, future research will show whether sage grouse conservation is actually helping the birds over time.

“Quite honestly, I don’t think we had the tools before to really focus on the larger perspective,” Deibert says.

On the lek with Patricelli’s team that chilly April morning, the faintest glow of red brushes the horizon and blushes against distant peaks of the Wind River Range and Owl Creek Mountains. The birds angle their bodies in a proud upright stance, puff up two air sacs on their chests, fan out their tail feathers spectacularly, and with coordinated wing and body movements, brush their white ruffled collars, flap their sacs, and try to attract mates. Recorded, videoed, surrounded by observers but unaware of the scrutiny, the sage grouse dance.

Maris Fessenden is a freelance science journalist based in Bozeman, Montana. Find more of their work at marisfessenden.com.