Essay: The Ancient History and Uncertain Future of Western Forests

Throughout the western states, trees grow abundantly over large areas only on the higher mountain ranges. However, trees were scarce everywhere about 20,000 years ago, based on evidence from pollen and plant fragments preserved in lake bottoms. Widespread mountain glaciers and the surrounding tundra-like landscape were not good environments for tree growth. 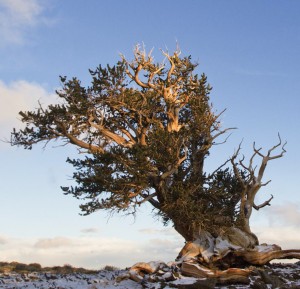 As the glaciers melted about 10,000 years ago, present-day forest ecosystems began to develop. Engelmann spruce, subalpine fir, and whitebark pine gradually became abundant at mid and high elevations, and they were followed by the slow expansion of limber pine, lodgepole pine, Douglas fir, and aspen. Open woodlands became forests, providing habitat for forest dwelling birds and mammals that previously had been rare. Several of them, such as the red squirrel and Clark’s nutcracker, consumed large quantities of pine seeds. Bark beetles and mistletoe surely were common, some years more than others. Like most of the trees, many small shrubs and herbaceous plants in the understory retained green leaves or stems throughout the year, enabling photosynthesis before and after the short summer. A few were capable of nitrogen-fixation, an adaptation for surviving on nitrogen-deficient soils (and which made nitrogen more readily available for other plants and animals).

If it were possible to look at a series of time-lapse aerial photos during the last 5,000 years or so, the mountain landscape would appear as a shifting mosaic of open woodlands, young forests, middle-aged forests, old forests, and various kinds of meadows. Forest fires would have burned with varying intensity over large areas during summers that were unusually dry and windy. Smoke would have hung in the air. The fires, however, would not have burned most of the tree trunks, which would fall to the ground one by one (or all at once during a windstorm). The dead trees and downed logs provided habitat for cavity nesters and contributed to soil development.

About 3,000 years ago, the time-lapse photo series would have showed forests at low and possibly mid-elevations giving way to meadows and shrublands, caused by further warming and drying of the climate. Native Americans might have appreciated more forage for bison and other large herbivores. Indeed, they might have started fires to reduce shrub and tree cover. Commonly the fires, whether started by people or lightning, would burn until rain or snow extinguished the flames. Eventually the climate cooled and trees again occupied the previously forested land.

Clearly, forest plants, animals, fungi, and numerous microbial organisms have evolved adaptations that enabled them to survive short, cool, and often dry summers; long winters; periodic wildfires; and young infertile soils. Throughout history, dead trees must have been common due to fire, wind storms, insect epidemics, and the death of older trees. The forests would have appeared messy, with downed wood making it difficult to walk, as noted by early explorers in their journals.

In current times bark beetle epidemics and wildfires have killed millions of trees. Some beetle-killed trees are harvested for their still-valuable wood. Other dead trees, so-called snags, are cut because they are hazardous along roads and in campgrounds, or they appear highly flammable. In some nearby forests, harvesting has been proposed because the trees are old, slow-growing, and a potential food source for the troublesome beetles. These “healthy forest initiatives” are an understandable response, but the wildfires and insect epidemics that have attracted so much attention in recent years have occurred before, with new forests developing after each disturbance. Some species benefit from the disturbances.

So is there nothing to be concerned about? Indeed there is. If wood production is a primary goal, large-scale disturbances provide an economic hardship, often killing trees while they are growing most rapidly. Also, roads and other development have fragmented once-extensive forest habitat, making the smaller populations of forest-dwelling species vulnerable to further disturbances of any kind. Moreover, so many mountain watersheds are now accessible by roads that those few that remain unroaded have become highly valued for dispersed recreation and less impacted habitat for sensitive species, helping maintain the biodiversity of the region. Fortunately, over large areas, traditional commodities such as wood and forage are still available and can be harvested in sustainable ways.

During the past 150 years, mountain forests have become highly valued for the commodities and amenities they provide—lumber, wildlife habitat, erosion control, forage for livestock (where the trees are not overly dense), and a pleasing contrast to the grasslands and shrublands of the surrounding lowlands. They are part of the attraction of living here. We know their abundance and distribution have changed dramatically since the glaciers retreated, and we know that beetle epidemics, fires, and windstorms will occur again in the future. That’s reality.

But climate change in the 21st century has introduced a troubling level of uncertainty. Some kinds of forest may become less common because wildfires occur so frequently that young trees burn before they can produce sufficient seed for the next generation. Moreover, if unburned seed does germinate, many seedlings may not survive because of more frequent droughts in late summer. Meadows may become more widespread reducing habitat for some species while others thrive.

The effects of climate change will be highly variable, influenced by elevation, topographic position, unusual weather events, human activities, and the kinds of plants and animals present at the time of the inevitable disturbances. The native forest species present today have survived such changes in the past. This time, however, climatologists have concluded the climate is changing more rapidly than before, and it’s occurring at a time when forest habitats already have been impacted over large areas by fragmentation, the presence of non-native species, and a growing demand in an otherwise semi-arid landscape for the habitat and resources that only mountain forests can provide. Just when forests are more fully appreciated than ever before, it appears that some of them could become less widespread.

Dennis Knight is professor emeritus in the Botany Department at the University of Wyoming.